Active Directory (AD) objects are rarely managed as standalone entities. In Part 3 of this series, we covered practical exercises for creating and managing two of the most critical AD objects, namely users and computers, after setting up a laboratory AD environment on virtual machines.

To manage AD effectively, knowledge and practical experience with AD groups and organization units (OUs) is imperative. In this fourth part of our series, we’ll elaborate on this.

AD groups: Groups are containers that hold other AD objects such as users, computers, or even other groups. Groups help with the effective organization and management of individual AD objects.

Individual AD users are often grouped together to form AD groups for better management. Grouping users based on a specific purpose ensures that appropriate permissions and access rights are enabled for better organization and control of each user identity.

AD administrators usually focus on AD groups comprised of AD users rather than of computers or of other objects, because of the dynamic nature and complexity of user objects. For example, the groups that the users objects may be a part of, the telephone number of a user, or the user’s access to different network resources may constantly change. These changes have to be made in AD. User groups are dynamic AD objects requiring constant updates and attention.

As covered in Part 1 of this series, one of the main benefits of AD is that administrators can centrally manage and administer effective resource allocation in the AD environment.

The permission to access certain applications and file systems, controlling user and computer settings and maintaining control on the availability and updating of software for every AD user are some of the settings that can be configured through Group Policy Objects in AD. Through them, the maintenance and management of the AD environment becomes seamless.

How do AD groups and OUs differ from each other?

Both AD groups and OUs can contain other AD objects; both of them help to manage the AD objects better but why do we till use both?

The answer lies in understanding the two categories of AD objects in finer detail. Let us compare and contrast the two below:

➤ Business needs, i.e., department-wise categorization of OUs or an AD group solely for sales executives of a particular product.

➤ Geographical locations, i.e., an OU created specifically for a particular region or an AD group for marketing executives in a particular branch office.

On careful analysis, it’s important to realize that in order to set up a successful AD environment, both groups and OUs have to be configured cohesively.

Although AD groups and OUs differ, they have to be managed together, taking into consideration both broad and granular management needs.

Now, to begin working hands-on with these two AD objects, let us divide the scope of this blog in two parts.

Similar to the procedure followed in Part 3 of this series, we will use Active Directory Administrative Center (ADAC) and Active Directory Users and Computers (ADUC) as the two primary tools to carry out the sample exercises.

To create a group with ADAC:

It is good practice to provide a short description of the group at the time of its creation. 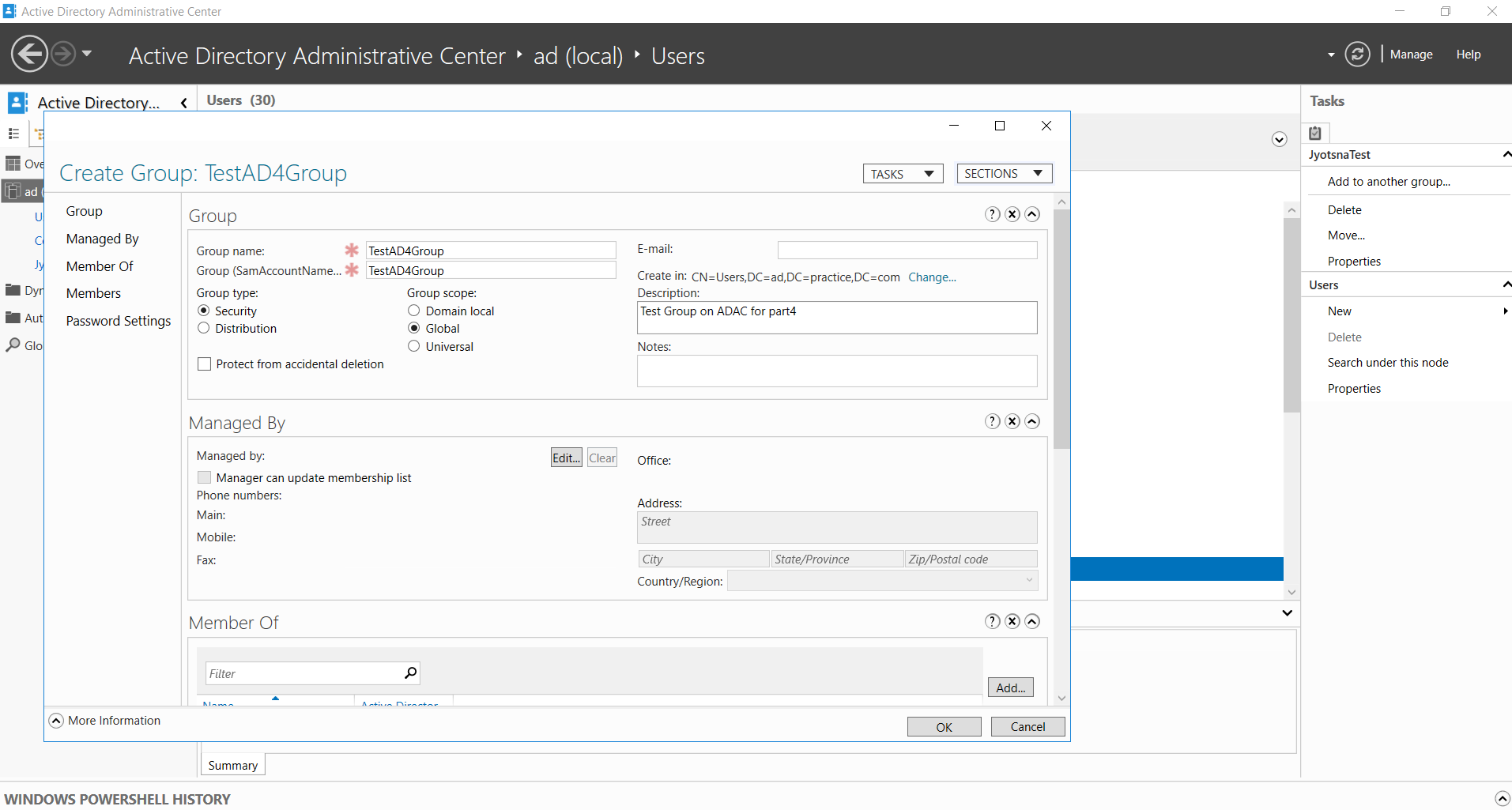 To create a group with ADUC: 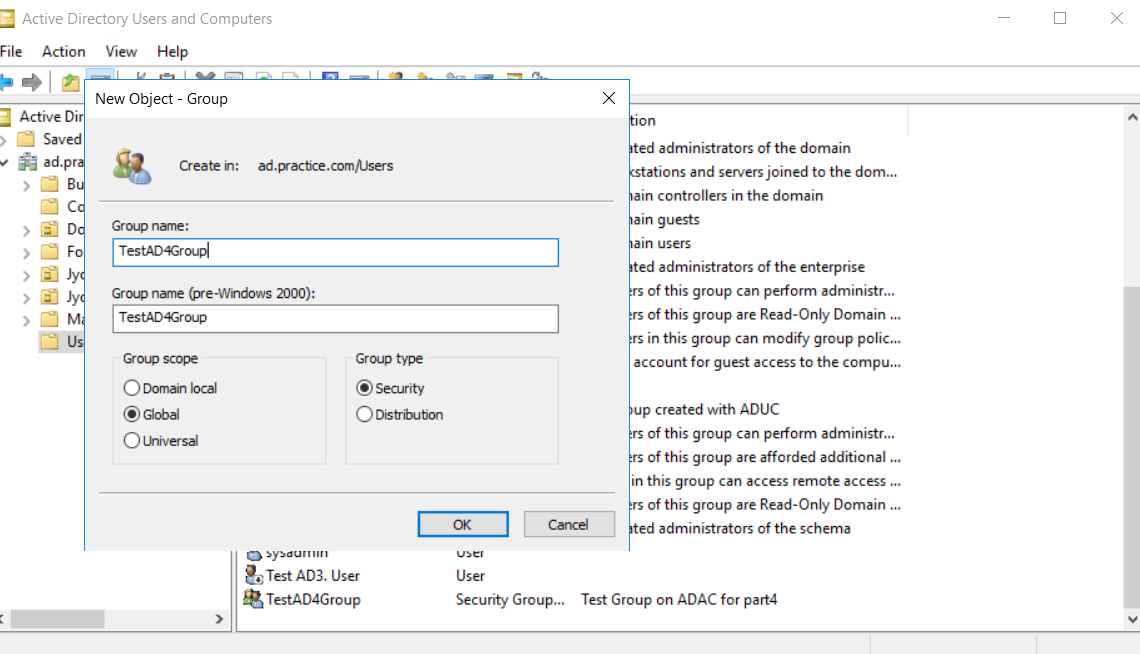 To add new members through either ADAC or ADUC, user names have to be searched for and then added.

Let us try this out. In our previous blog, a sample user called Test AD3.User was created.

To add this user to the group TestAD4Group, you can use either ADAC or ADUC.

A screenshot of the window that opens up during this operation is shown below. 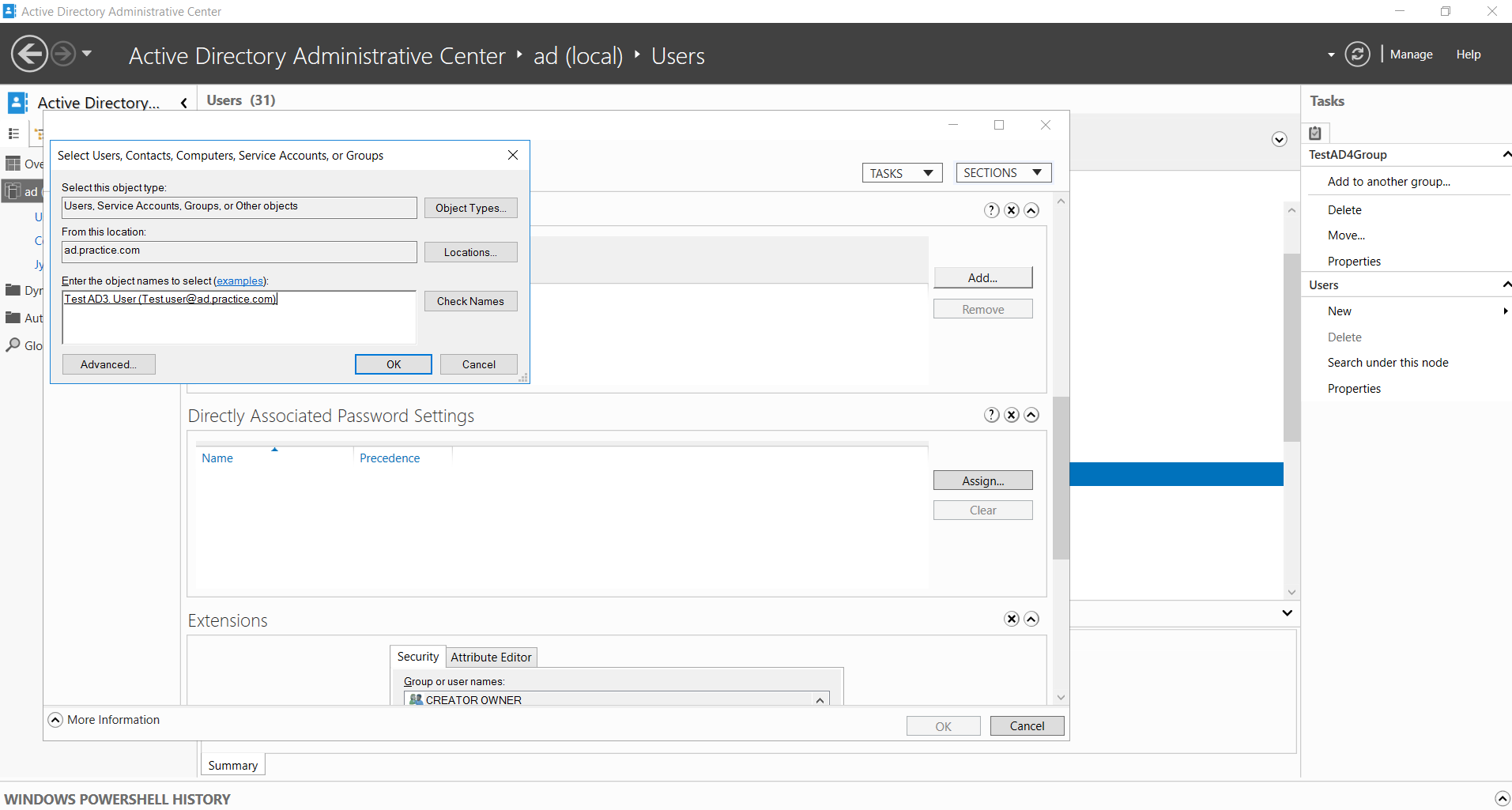 You can also delete group members through ADAC and ADUC using the remove option.

Computer groups can be created in the Computer containers on both ADAC and ADUC. Computers created can be added to these computer groups in a similar manner to that followed for users.

To delete AD groups that no longer serve their intended purpose, right-click the AD group and choose the delete option available on the menu that pops up.

Any problems concerning AD groups usually involve members being part of incorrect groups. Group properties can be reviewed and members can be added or removed as per the procedure explained above to ensure that the appropriate AD groups are configured for the right set of AD users.

OUs differ from default containers in their ability to have Group Policy applied to them and the possibility to have other OUs contained within them. Either of these is not possible with containers.

To have a hands-on experience with working with OUs, either ADAC or ADUC can be used. Let us look at a few simple AD exercises on OUs.

Before the how behind the procedure of OU creation is discussed, a good understanding of the why is crucial. Once the purpose of the new OU is clear from an organizational and administrative perspective, the following procedure can be followed for creation.

To create an OU with ADAC: 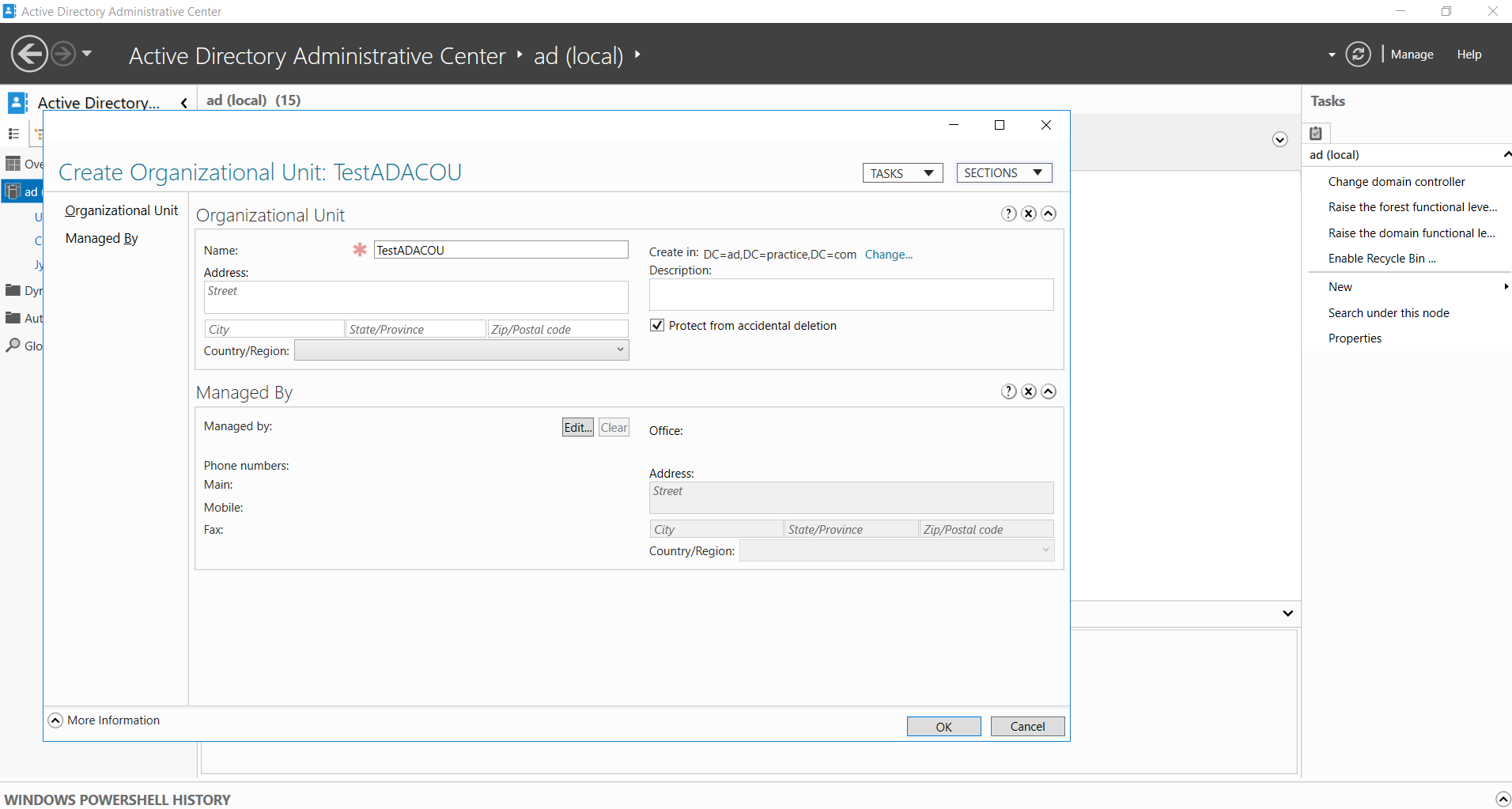 The procedure is similar in ADUC; right-click on the required domain to create a new OU.

Since OUs contain innumerable other important AD objects that form the basis of how resources in the organization are centrally managed, administrators have the option to protect them from accidental deletion. This will help prevent the unnecessary, malicious, or wrongful deletion of OUs at the hands of others.

Consider a scenario where certain employees in the organization are transferred to a new department at a new location. In these cases, moving objects between OUs becomes a critical task to ensure that this change reflects in the AD database too. All the necessary changes in the employee’s Group Policy settings have to be configured.

After learning about some of the most important practical tasks associated with AD groups and OUs, you can now rest assured that your foundation on AD is sound. The ultimate aim of this series is to help you build on your knowledge of Active Directory Domain Services to understand a wide variety of AD management aspects.

AD is a complex world in itself used for a variety of purposes. This blog series is a step towards establishing a strong working foundation to tackle AD, starting with the fundamentals.

How do you begin working with Active Directory Domain Services (AD DS)? If you have read the previous parts of this blog series, you will know...