The need for in-depth network monitoring is growing exponentially as organizations expand in size and more companies are established. Increased monitoring needs demand a feature-rich tool to simplify networks and get a clear view of their underlying infrastructure. Diagnosing network faults and ensuring a well-balanced operation of all network devices is the primary task of a network admin any day. Having a tool that helps map the route taken by data packets and assists in locating the point of network disturbance makes network troubleshooting much easier.

One such tool is traceroute software, which is gaining importance amidst admins even today despite being invented over 30 years ago. A traceroute tool helps map the route taken by IP packets from the source to the destination within an IP network. It presents the user with a detailed plot of the routers and servers the IP packet traveled through. The real game changer is choosing the right tool for your organization among numerous traceroute tools available in the market. Read on to understand how this type of tool troubleshoots networks and ensures continued connectivity.

Where is a traceroute tool used?

Traceroute monitoring tool, also known as tracert, is a troubleshooting tool that helps a network engineer understand their network better and identify security threats, which is the primary goal of any monitoring aid. Any organization using multiple devices, such as laptops, switches, routers, VMs, and firewalls, will need a network monitoring tool. Traceroute software helps admins maintain network continuity by allowing them to resolve threats to the network before they become larger issues. Any organization or network of devices interacting with each other would function seamlessly with tools for running a traceroute system, conducting a speed test, monitoring for continued connectivity, checking faulty configurations, identifying network lag and unreachable nodes, identifying and resolving security problems, and addressing packet loss and latency issues.

How does a traceroute tool work?

This simple network tool helps you discover the operations taking place within an IP network on a microscale. All the data that is to be transferred from the source to the destination is chunked into packets. These data packets travel through the network by hops. With each data transfer, the network traceroute tool furnishes you with information on the time taken, the number of hops, and the IP address of the nearest node device. The whole process is performed using an OS-independent protocol called ICMP. The following are some of the activities within a traceroute network.

This is how traceroute monitoring tool works.

A work environment requires seamless internet connectivity, so minimizing network issues is key. A poor internet connection may be due to a faulty device, like a router, switch, or server; defective connectors; a loose connection; or other issues like packet duplication, throughput, and jitter. Packet loss, latency, and network loops are some of the common problems encountered in a network.

Traceroute software measures the latency and packet loss in a Windows environment using ICMP and in a Unix machine using UDP packets. Interpreting the traceroute performance monitoring results is one of the obvious ways to find a solution to the problem. You should analyze the whole report and go through the trends of the round trip time (RTT) since a single high RTT value doesn’t indicate a problem. The same goes with packet loss. If the packet loss is not consistent, it is not really a problem. If packet loss occurs, the relevant response time column would be nil. For a latency issue, the relevant response time value would be high.

Benefits of a traceroute tool

With traceroute software, you will be able to:

In a nutshell, a traceroute service gives a network admin the power to visualize the invisible processes within their network. 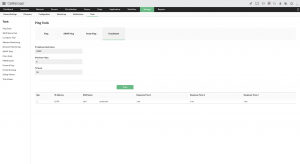 OpManager, highly integrated, feature-rich network monitoring software, offers a traceroute tool by default and gives organizations strategies to fortify their networks against problems. The traceroute tool is present on the device snapshot page of the discovered device in OpManager. Clicking this option will quickly run the traceroute monitor activity on the installed device, along with all associated devices. This generates a brief comparative output, giving you actionable insights on network metrics. This helps you resolve bottlenecks in your network.

Your network needs holistic monitoring to safeguard it from network problems. Download our free, fully functional, 30-day trial of OpManager to try out the embedded traceroute software yourself.