Celebrating the power of the internet

International Internet Day (10/29) is an occasion for people to celebrate the great invention that transformed the way we live, work, and communicate. The day is an annual reminder of how far we have come since the creation of the internet and where it might take us in the future.

Let us look into how the internet invaded every aspect of our daily lives and became indispensable.

The story of the internet

The origins of the internet can be traced back to the 1960s as a way for government officials to share information. However, the biggest leap of the internet came a decade later with the creation of the Advanced Research Projects Agency Network (ARPANET). Before long, the first internet transmission was sent from UCLA to Stanford Research Institute on Oct. 29, 1969, intending to be the message “LOGIN” but appeared only as “LO”—the last three characters were lost to a terminated connection. This occasion later came to be known as Internet Day.

By 1986, over 5000 computers were connected to the internet. The number grew exponentially to millions after the internet was made available to not just government and academic users, but to commercial users as well.

As a result, the internet took off globally in the early 1990s. The introduction of the World Wide Web and the personal computer accelerated the surge.

Eventually, ARPANET was officially decommissioned in 1990 and was superseded by the modern-day internet. In 1999, Web 2.0 arrived, marking a new era of user-centered internet.

Now in 2022, it is estimated that 5.25 billion people have access to the internet. The advancements we have made—from barely sending two letters across the state of California to sending enormous amounts of data around the globe instantly—are undoubtedly a reason for celebration on this day. 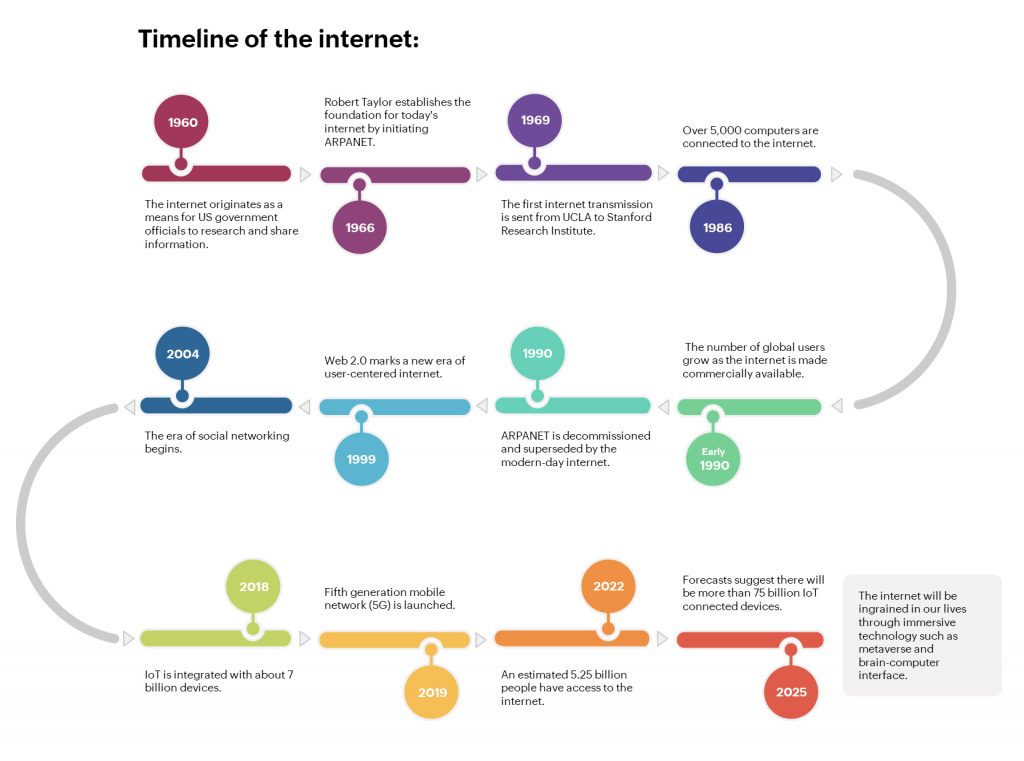 How has the internet revolutionized our lives?

The mere ability to use the internet 24/7 is one of the biggest revolutions in communication. The internet has changed the way we connect with each other, learn, and share information. It has made life more convenient, productive, and fast. It has also opened up a new world of opportunities for businesses and individuals alike.

Take working from home, a phenomenon only made possible by our access to high-speed internet. Today’s world is smaller thanks to this and other innovations like social media platforms that connect people across the globe.

Moreover, with new technology comes new job opportunities. Hundreds of careers that didn’t exist before, such as SEO specialists, software engineers, software developers, and data scientists are necessitated by the internet.

Future of the internet

No one from the 1960s would have imagined the internet to be what it is now. So, it is equally difficult for us to predict its future. However, we can anticipate it to be a lot better than what it is now. Here are some predictions that leading experts in the field can agree on.

Although virtual reality (VR) technology is not new, its reach since its initial introduction in the 1980s has been slow. But today’s VR is immersive, efficient, comfortable, and increasingly affordable. And now that mobile phones are capable enough to support augmented reality (AR), both AR and VR will become more readily available in everyday devices and continue to be integrated into our lives on a large-scale.

Growth of the Internet of Things (IoT)

There are a growing set of devices that support IoT. This will eventually extend to every device we use, including cars, dish washers, vacuum cleaners, and health monitors, to name a few, ultimately leading to the number of IoT connected devices to reach 21.5 billion by 2025.

In the next stage of web evolution, services are predicted to run on blockchain. The internet will become intelligent, processing information through the help of AI systems.

In Web 3.0, users will be in control of their own data and will be able to move from emails and social media to online shopping using a single account, stemming from the creation of a public blockchain of all their activities. Besides this, blockchain will be virtually immune to violation of privacy and plagiarism.

How does ManageEngine ITOM solutions help businesses thrive in this era of the internet?

Businesses today largely depend on IT to carry out their standard operations. The internet has made the international market more available through instant contacts, networks, and communication channels.

For a seamless performance of network in an organization, the physical and virtual components that constitute the IT infrastructure have to be regularly monitored to ensure health, optimum performance, and availability.

The internet has come a long way since its humble origins. It is a dynamic, ever-changing entity that shows no signs of slowing down. On behalf of ManageEngine ITOM solutions, we wish you all a happy International Internet Day!