“Automation applied to an inefficient operation will magnify the inefficiency.” – Bill Gates

A network, as we all know, is the connection of multiple devices to share information between them. While it’s a major task to manually manage every device connected to a network, a software-based feature called network automation can be utilized to help overcome this challenge. Network automation can be used to automate tasks so the workload and any human errors are greatly minimized. 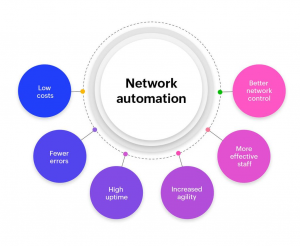 Why does configuration or any of the above-mentioned components need to be managed using a network automation solutions?

The answer is simple.

Network automation tools aren’t without their challenges. Some of these challenges are listed below:

These challenges are greatly minimized when using Network Configuration Manager.

Key features that a network automation tool should have

Making a backup of the network configurations is essential for future use in case downtime occurs. With Network Configuration Manager’s backup feature, you can perform automated, manual, or scheduled backups according to your needs.

Network Configuration Manager uses real-time change detection to alert you immediately if a change is made and if the change is authorized or unauthorized. It also has a role-based access control feature where admins have full authority and any changes have to be approved by them.

Configlets in Network Configuration Manager are a set of command templates used for multiple purposes and multiple devices. Using Configlets, you can add passwords for 10,000 devices or enable or disable SNMP for devices in bulk, saving time and effort. They’re mainly used for troubleshooting multiple devices at once.

Compliance rules set the standards for a network device to follow so that no major data leak or any other major situation occurs. Common policies include Cisco IOS, PCI, SOX, and HIPAA.

If devices are non-compliant, then Network Configuration Manager labels them as a Critical violation, Major violation, or Warning violation, depending on the device. Here, Configlets can also be used for remedial purposes.

Network Configuration Manager also allows you to create rules and policies on your own and apply them to devices.

Firmware is a specific class of computer software that provides low-level control for a device’s specific hardware. Since firmware is in constant danger from malicious attacks, Network Configuration Manager analyzes it for any threats. If a threat is detected, the tool creates a report with a CVE ID (vulnerability ID), with which you can identify what the risk is for the device using a base score.