Braving the cyberattack storm: a refresher on security essentials.

This has certainly been a busy summer for hackers worldwide. First, it was the U.S. federal agencies. This recent hack, aimed at the Office of Personnel Management (OPM), is already being referenced as the largest government data theft ever recorded. Next was the breach of the German parliament‘s system. Subsequently, websites of several Canadian government services were taken down in another attack.

Only a few weeks ago,  LOT Polish Airlines, too, joined the list of cyber victims. The attack led to delayed takeoffs and grounded nearly 1,400 passengers. A recent report released by the Identity Theft Resource Center (ITRC) claims that there has been a total of 541 data breaches so far in 2015, in the U.S. alone.​ 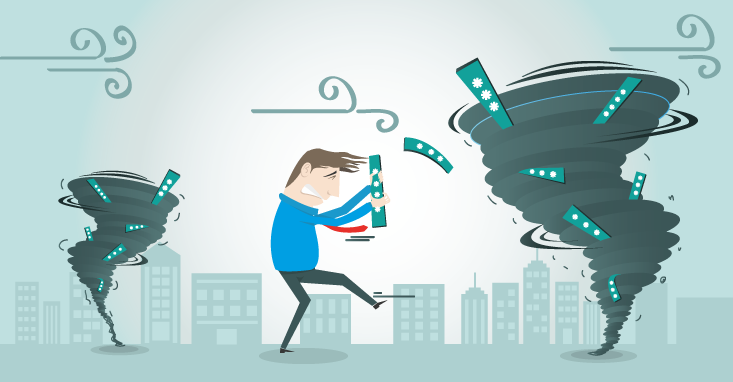 Clearly, it is the age of online attacks, and these attacks are merely a prelude to a whole new era of sophisticated hacks. Now, take a moment to think about your data in this era of sophisticated hacking. How strong is your security? Do you have what it takes to safeguard your IT resources and keep attackers at bay? How proactive are you in preventing hackers? If your answer to any of these questions is unclear, it might be time to look into the tips and tools that will help you lock down your security and keep out any possible intrusions. Here is a snapshot  on security essentials that keep your basic controls in place.

Typically, IT divisions in enterprises have a large number of privileged accounts that  hold the access to critical assets and classified data. At times, administrators may not even be aware of some of the accounts’ existence. These accounts are more commonly known as the Keys to the Kingdom, in the world of information security.

If these keys fall in the wrong hands, they can be used to breach sensitive data, carry out unauthorized transactions, and even delete audit trails to retain anonymity. That is, leaving privileged accounts unmanaged and unattended is a risk serious enough to bring down an organization. Therefore, adopting a solid security plan is the best option to ensure the security of privileged accounts. You can do this by subjecting these accounts to an automated life cycle management. Some aspects of this security plan should be as follows:

Thankfully, you don’t have to do all this manually. With a simple tool such as Password Manager Pro, this automated life cycle management is easier than ever.

Providing administrative access to systems without proper controls is like giving out an open invite for a security breach. In fact, security experts claim that the biggest IT risk comes from employees and contractors with unlimited access privileges. There have also been scores of major security breaches that validate this statement, such as those at Barclays Bank, Target, and DuPont. For instance, DuPont fell victim to an intellectual property theft after a contractor working for DuPont sold a proprietary formula for $28 million to one of DuPont’s competitors, a Chinese company. Upon investigation, the contractor was accused of conspiring with former DuPont employees and stealing 149 of the firm’s trade secrets, between 2006 and 2009.

Managing employee access to passwords can be achieved simply by defining clear roles for your users, as well as subjecting them to access control workflows and request-release mechanisms for password retrievals, which make sure users are allowed to access only the resources they are supposed to. On top of that, additional measures, such as allowing temporary access and promptly revoking it, letting users log on to accounts without viewing the passwords in plain-text, and more will help enforce centralized control over your passwords. These features are also native to Password Manager Pro, which will help you with the small details of security.

3) Track and monitor: Always keep an eye out

​Periodic audits often consist of large grey areas, where you have no clear answers to the “who,” “what,” and “when” of privileged access.  Instead, you should stay aware and track what privileged users are doing by laying down a comprehensive audit trail, which helps monitor and assess user activities. As a matter of fact, proactive monitoring of privileged access has long been a mandatory requirement to achieve compliance with various IT regulations, such as PCI-DSS, NERC CIP, and ISO/IEC-27001. Apart from implementing granular logging, you can also do the following to strengthen your system.

To put it briefly, privileged account management, user access management, and proactive monitoring of privileged sessions are the security essentials that will help your enterprise stay in complete control of its IT resources. Hackers almost always aim to compromise privileged identities to  access critical assets. With the number of privileged accounts increasing in enterprises, this risk is only getting bigger and the significance of a resilient IT security cannot be stressed enough. Administering a dedicated strategy that incorporates the aforementioned aspects will help you safeguard your organization from the clutches of cyber criminals.

We’re elated to announce that ManageEngine has been recognized in the 2022 Gartner® Magic Quadrant™ for Privileged Access Management. Read the full report A Gartner...